Updates while it's Gray as balls outside.

I apologize that I've been so lazy on the upkeep of this place.
I know those dishes shoulda been done, and the floor looks like it's in need of some sweeping, and vacuuming. But I look at the mess everywhere and sigh and flop over on the couch instead. C'est la Vie....

So lately, I have been trying to figure out what to do with the front yard.
I have two designs... one that's very functional-basically a Garden, and the other which is nicely stylish-true to the meaning of Landscape design. 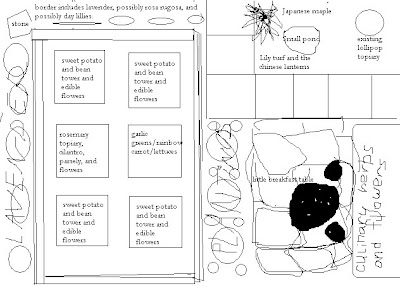 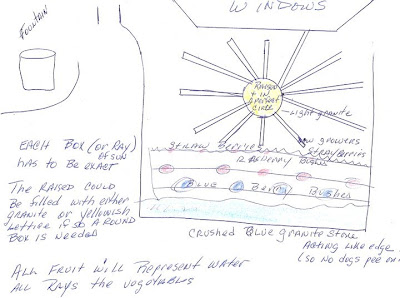 And these are the only layouts that are in the computer. There's maybe 10 more that weren't uploaded.

At this point, I can't tell whether I'm craving more maintenance and more veggies, or less maintenance and more fruit bushes. ::scratches head:: yarg.
But I have been thinking that I should be able to get enough blueberries that I no longer have to drive 3 hours to the nearest U-Pick blueberry place.
And that if I'm going to put in strawberries, I might as well put in enough so I don't have to pay/drive to the U-Pick place for that either.

On that note, I've noticed that celery which used to range from 88 cents-$1.00 is not some obscene amount like 2.99 I believe it was blamed on the weather and gas prices, but it was a sober reminder to me that I could either grow it myself, or part with hard earned money for it.

In some way I need to marry the two. Form and Function.
Not to mention my neighbor who loves her lawn might have an aneurysm and claim I'm bringing the property values down. Y'see... this is where me being a peacekeeper gets hard.
Fruits? Veggies? Low maintenance? High maintenance? Where's the sun? Can't plant high stuff there and shade everything out! how can I do this but not be the village eyesore? How can I Maximize my produce and fruit so my property pays me in groceries. the words swirl around and around my head like that simpsons episode:
http://www.youtube.com/watch?v=XWBhnsMH4dI


I figure after all the thought and contemplation, it'll just somehow be a merger between the above 2 designs :)
Posted by Holly at 7:37 PM