The Snow dragon of Snowmageddon

I don't know how I managed to forget to post this!

But there was a crazy blizzard a few weeks ago of biblical proportions!
I believe it was 3 or 4 feet of snow, and basically at 7pm my village gave up on plowing subdivisions, so if you weren't home by then you most likely weren't going to be home.

Well after my husband and I took 2 hours to shovel our very short driveway, the kids pretty much played in the snow all day.

I went out about an hour or two before sunset and told him I'll make him a snow dragon.
Especially since the next day was Chinese new year! Although a friend of mine did point out that it was the year of the rabbit... but NO MATTER! What's a chinese new year without a dragon!! So my husband was like "have fun, see ya".

About an hour into it, I asked him to come out and help color the dragon.
He had to pick his jaw up off the ground because I completely failed to mention that it might be scale 1:1 Hey it wouldn't be awesome unless you could sit on the back! 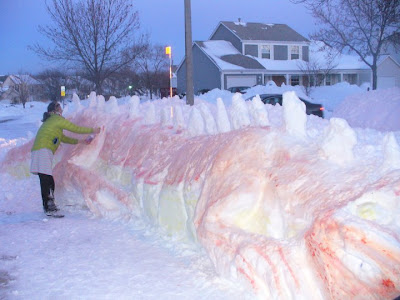 From the back (standing in the street) 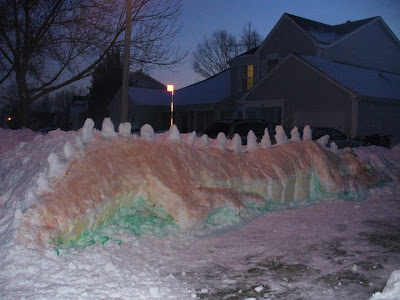 His eye was a small ball with a GE Logo on it but it worked perfectly! 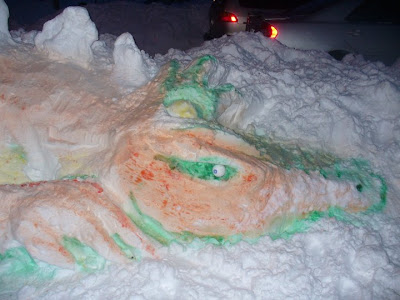 One hand up in the air like the rodeo riders! YEEEE HAWWW 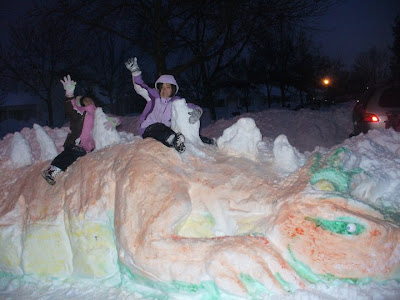 I'm the unassuming one in my pajamas 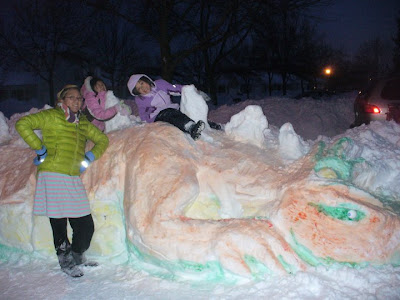 In hindsight, a fishing buddy pointed out that if I had sprayed KOOLAID or JELLO instead of water and food coloring, that this would truly be an edible landscaping project for the winter!!! :) Hrmmmmm Tempting. Very tempting, but it'd be hard to tell if you'd really want to eat that patch of snow or not. And whose to say the yellow snow was really the lemonade flavor and not dog pee!?

But I might definitely keep that in mind. It'd be cool to taste it on the first day.
Posted by Holly at 7:56 PM